I wept for half an hour before making myself get ready for work. All day I kept tearing up & having to duck into the bathroom to collect myself. As soon as I got home I lifted the stack of his books from my shelf, sat down, & cried into them. He wasn't a relative. I never met the guy. But to the extent that a twenty-something girl could be in love with an 80-year-old gay man, I loved him. If that sounds creepy, well, whatever. I did. & if you're reading this you probably already knew that. 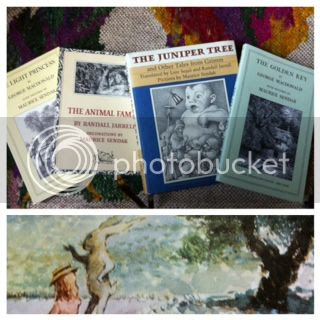 The Light Princess, The Golden Key, The Juniper Tree, The Animal Family, & Mr. Rabbit & the Lovely Present - all illustrated by Sendak

My first Sendak memory is reciting Chicken Soup with Rice in kindergarten. "In April I will go away to far off Spain or old Bombay, & dream about hot soup all day..." The rhyme is so perfectly memorable. "Oh my, oh once. Oh my, oh twice. Oh my, oh chicken soup with rice." 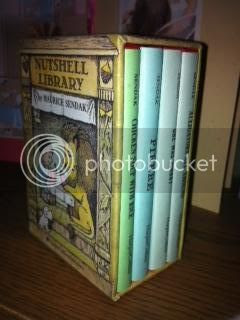 I probably read Where the Wild Things Are (Does it make me a Sendak hipster that I scoff whenever someone's only reference to him is Wild Things?) & the rest of the Nutshell Library & maybe a few others as a kid, but I didn't really connect with Sendak until a few years ago, when I sat in a tiny chair in the children's department of the Hollins U library & read through a stack of Sendak books looking for inspiration for a paper (which I found). That's where I first read The Sign on Rosie's Door, Outside Over There, & - my favorite Sendak book of all - Kenny's Window. 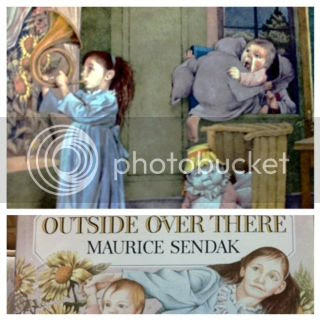 The scary ice baby from Outside Over There

I read Kenny's Window over & over. It was crushing sadness & falling in love all at once, though I guess those go hand in hand more often than not. Kenny's Window, published when he was 27, is the first book he wrote & illustrated. It's almost unrecognizable from his best-known works like Wild Things & In the Night Kitchen. The drawings are more like rough sketches, though with Sendak's same hatching, & the same little terrier. It's colored only in browns & yellows, & the story's very wordy & far from straightforward. Most critics who've touched on the book aren't fond of it, but it speaks to me like no other book I've read. One copy I have (I have a few...) has a gift inscription in it: "This book is strange. Let it be strange, & see where it takes you." Whoever wrote that was spot-on. 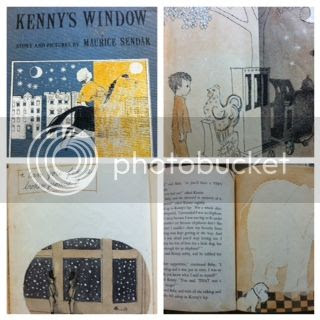 It pokes a finger straight into my heart in a spot that I don't like anyone else to know is there, the part that feels the painful passage of childhood & the guilt of growing up. The part that wants to fly on a horse to the sea where a boat waits to take me away from the place I grew up - but that also looks back at the teddy bear sitting on my bed & is so heartbroken all I can do is throw things. It's the same reason I love J. M. Barrie so much.

From there I was completely smitten. I've collected as many of his books as I can get my hands on (& still have a long way to go), including the first book he ever illustrated, a physics textbook called Atomics for the Millions. I've tried to learn everything I can about him short of knocking on his door. 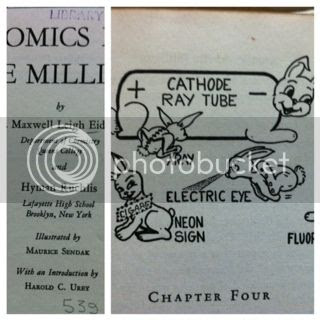 Atomics for the Millions - It's easy to see his comics/Disney influence.

There are so many things that draw me to Sendak. His illustrations are captivating & his fairy tales are beautiful. But more than that it's the way he views children & childhood. He respected them; he thought them gutsier & smarter than grownups. Shelter a child from the harsh realities of the world? As he said about parents finding his movie too dark or scary: "I would tell them to go to hell. That's a question I will not tolerate. ... If they can't handle it, go home. Or wet your pants. Do whatever you like. But it's not a question that can be answered." 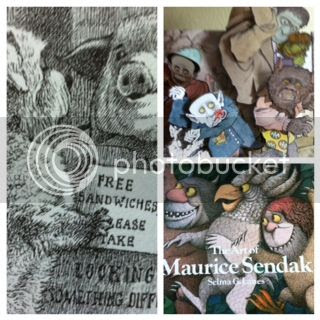 Higglety Pigglety Pop! or There Must Be More To Life, his pop-up book Mommy?, & The Art of Maurice Sendak

Sendak didn't have an agenda; he just did what he loved & said screw anyone who doesn't like it. He never caved to parents who sought to censor him. He was nothing more than himself & thought children should be left to be themselves, too. Children, who are selfish, creative, lonely, gleeful, unrestrained, & sometimes tragic. 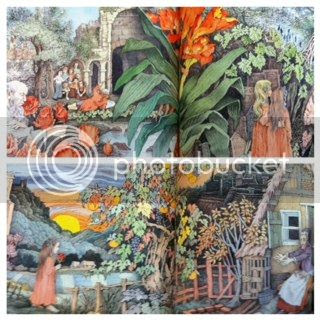 My favorite Sendak illustrations, from the book Dear Mili by Wilhelm Grimm

It was an honor just to have my life overlap his, to be alive while he was alive. I can't say that about many of my favorite authors. & it would be selfish to wish that an 83-year-old man who welcomed death, saying, "I'm ready, I'm ready, I'm ready," would've stayed longer. It's just so hard to see him go.

What Sendak book was your favorite? Feel free to mourn with me.
Posted by Erin E. at 6:28 PM